The origin of the OBA in the early years is obscure and its records scanty. With reference to the school magazine, The School Review 1936, Reverend Abel Eklund, the second principal of ACS Klang, helped to organise the OBA in 1925.

According to a letter dated 20th November 1957 written to the school by an Old Boy, the late A.S.P. Leong Boon Swee (who was then stationed in Ipoh), he was the first President of the OBA when it was formed in 1926. In 1936, Rev. Eklund and Mrs. Ruth Eldund returned to Klang after an absence of 10 years. The Old Boy responded to the call of their Alma Mater. On the evening of 7 November 1936, nearly 100 of them gathered at the old MGS Hall in Jalan Bukit Jawa.

They were welcomed by Reverend Eklund who urged those present to revive the OBA. On that occasion, Old Boys from all walks of life – custodians of office books, magistrates, doctors and leading businessmen – mingled freely. This meeting resuscitated the OBA, and Che Ahmad bin Haji Mahmood was elected the President with Mr. G. S. Arumugam as the Hon. Secretary.

The members of the OBA were scattered and it was not possible for them to meet very often and work effectively. It existed as an organization of Old Boys and came to life as and when an occasion arose.

The most serious attempt to revive the OBA was made on Friday, 15 November 1957 when more than 100 Old Boys attended a meeting in the school Hall and formed a pre-tem committee to draft the rules and register the Association. The meeting was presided over by Mr. Goh Tiang Chin, a leading Old Boy at that time. The District Officer of Klang, Tuan Syed Hashim b. Abdullah and the Principal, Mr. D. R. Daniel addressed the Old Boys. Encik Mohd. Noor b. Abu Nawas was elected the pro-tem President and Mr. C. E. Benjamin the pro-tem Secretary. Before the meeting, badminton and volleyball matches were played between the Old Boys and the students for which trophies were donated by the District Officer. A reunion dinner was held on the same evening at the Evergreen Restaurant, Klang.

The OBA was finally registered on 11 February 1961. The Inaugural General Meeting was held on Saturday, 21 October 1961 in the School. The meeting was attended by 52 Old Boys from as far as Kuala Lumpur and Seremban. Mr. Koh Liang Sih was elected President and Mr. A Ramanathan the Hon. Secretary. On the same night, a reunion dinner was held at the Evergreen Restaurant, Klang.

Annual meetings and reunion dinner have since been held. In 1986, the OBA celebrated its Silver Jubilee.

The OBA strives to develop a true spirit of loyalty and love for the Alma Mater and to render assistance towards the development and progress of both the Primary and Secondary Schools. To this end, the OBA offers :

The members of the OBA also participate in or attend numerous functions of both Schools, such as games, carnivals, concerts, walkathons, Annual Sports Day, Annual Speech Day, ceremonies and other school celebrations.

Fellowship has been given equal importance and the OBA organizes :

The OBA also participate in friendly games with other OBAs and in games competition in the District.

Over the years, the OBA has expanded its membership and activities. It has become a cohesive and meaningful organization. 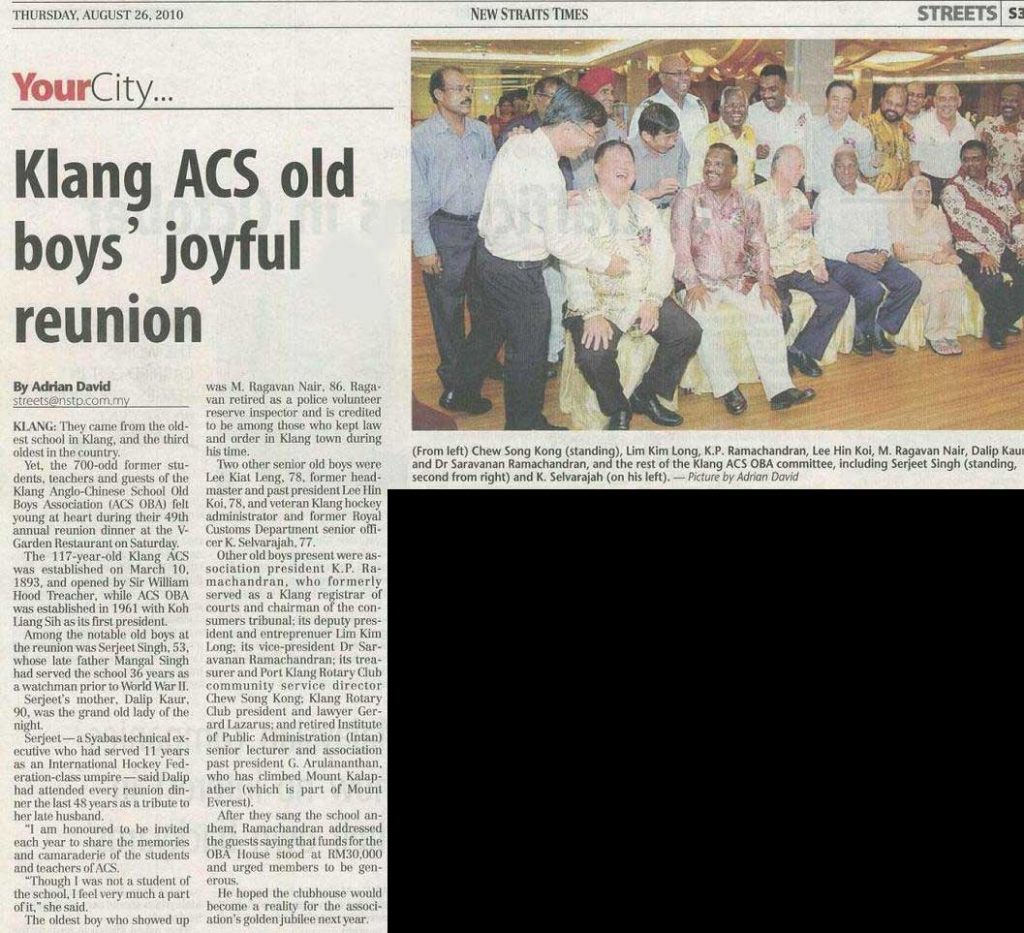